Pilates is a form of exercise that aims to strengthen your entire body evenly while paying particular emphasis on core strength. In fact, the cornerstone to this exercise is controlling and working your body from the core to the periphery. Additionally, Pilates exercises help rebalance the stabilizers muscles around the joints improving balance, range of motion and general fitness, that makes your body less susceptible to injuries.

Pilates is particularly valuable for those who train martial arts like Brazilian Jiu Jitsu because it helps to strengthen some of the same primary muscle groups used in BJJ like your core, glutes and legs. In addition, it also helps to improve balance and flexibility, which are a crucial part of martial arts training. Maybe the most valuable part of pilates for martial arts is injury prevention. It strengthens all the small stabilizer muscles around your joints which often go overlooked. This is why we at American Top Team Fort Lauderdale feel pilates is an important supplement to your martial arts training routine.

Joseph Pilates was born in Germany in 1883. He was a frail child, suffering from asthma, rickets and rheumatic fever. His drive and determination to overcome these conditions led him to become a competent gymnast, diver and skier. 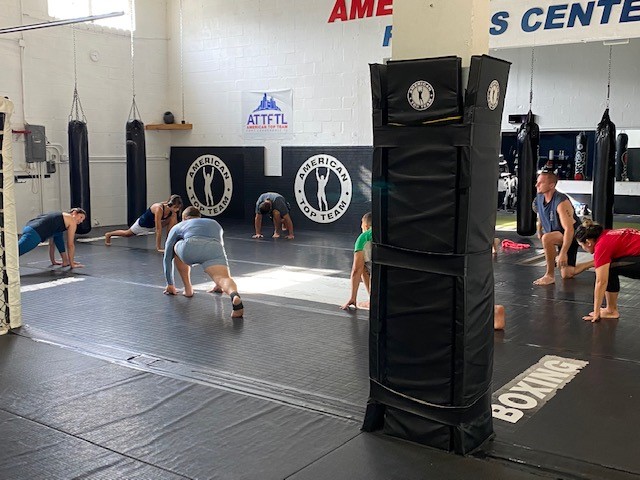 In 1912 Pilates lived in England working as a circus performer, boxer and self-defense instructor. During the First World War, he was interned with other German nationals. During this time he developed his technique of physical fitness further, by teaching his fellow internees. During the latter part of the War, he served in a hospital where he worked with patients unable to walk. He attached bed springs to the hospital beds to help support the patients’ limbs, leading to the development of his famous equipments.

Pilates emigrated to the USA in the early 1920s with his wife Clara, and together they developed and taught the method in their ‘body-conditioning gym’ in New York in 1926. During his lifetime the method was called Contrology and control is absolutely what you’ll need and develop in this class. It was only after his death that it became known as the Pilates Method. Ahead of his time, believed mental and physical health were closely interconnected.

Through the years the Pilates Method has gradually evolved and integrated current bio-mechanical thinking. However, the roots of the technique are steeped in the philosophy and movement patterns designed by Joseph Pilates over 90 years ago. Today his core method is still taught, as well as an evolved form integrating modern anatomical and bio-mechanical thinking.

The popularity of the Pilates Method has spread steadily since the day when Pilates first opened his studio. Pilates has now become a worldwide phenomenon with over 12 million people practicing, and the numbers continue to grow due to its effectiveness and adaptability.

Why make Pilates a practice in your life?

Pilates is a great exercise on it’s own, but this is also an amazing supplement to your Jiu Jitsu or Martial Arts training. Pilates can help improve your Jiu Jitsu performance by decreasing the time of recovery between sessions, increasing the strength in your deep stabilizer muscles (which leads to better balance and posture), and improving the range of motion of your joints and flexibility of your muscles.

We now offer classes twice a week on Monday and Friday mornings at 9am. If you want to sign up for only Pilates classes we have that option. Or you can get unlimited training in all areas which include Pilates as well as martial arts, cardio kickboxing, and other classes.

Here at American Top Team FTL we have well-targeted and supervised training by trained instructors. Come try pilates with us!

Get an extra FREE t-shirt when you register online! Click here to learn more and to register.

THE MIND, WHEN HOUSED WITHIN A HEALTHY BODY, POSSESSES A GLORIOUS SENSE OF POWER